Across the United States and Canada Native Women and girls are being taken or murdered at an unrelenting rate.

There is widespread anger and sadness in First Nations communities. Sisters, wives, mothers, and daughters are gone from their families without clear answers. There are families whose loved ones are missing—babies growing up without mothers, mothers without daughters, and grandmothers without granddaughters. For Native America, this adds one more layer of trauma upon existing wounds that cannot heal. Communities are pleading for justice.

However, the data to confirm the scope of the problem is elusive.

"The National Crime Information Center reports that, in 2016, there were 5,712 reports of missing American Indian and Alaska Native women and girls, though the US Department of Justice’s federal missing person database, NamUs, only logged 116 cases."

A red hand over the mouth has become the symbol of a growing movement, the Murdered and Missing Indigenous Women (MMIW) movement. It stands for all the missing sisters whose voices are not heard. It stands for the silence of the media and law enforcement in the midst of this crisis. It stands for the oppression and subjugation of Native women who are now rising up to say #NoMoreStolenSisters. 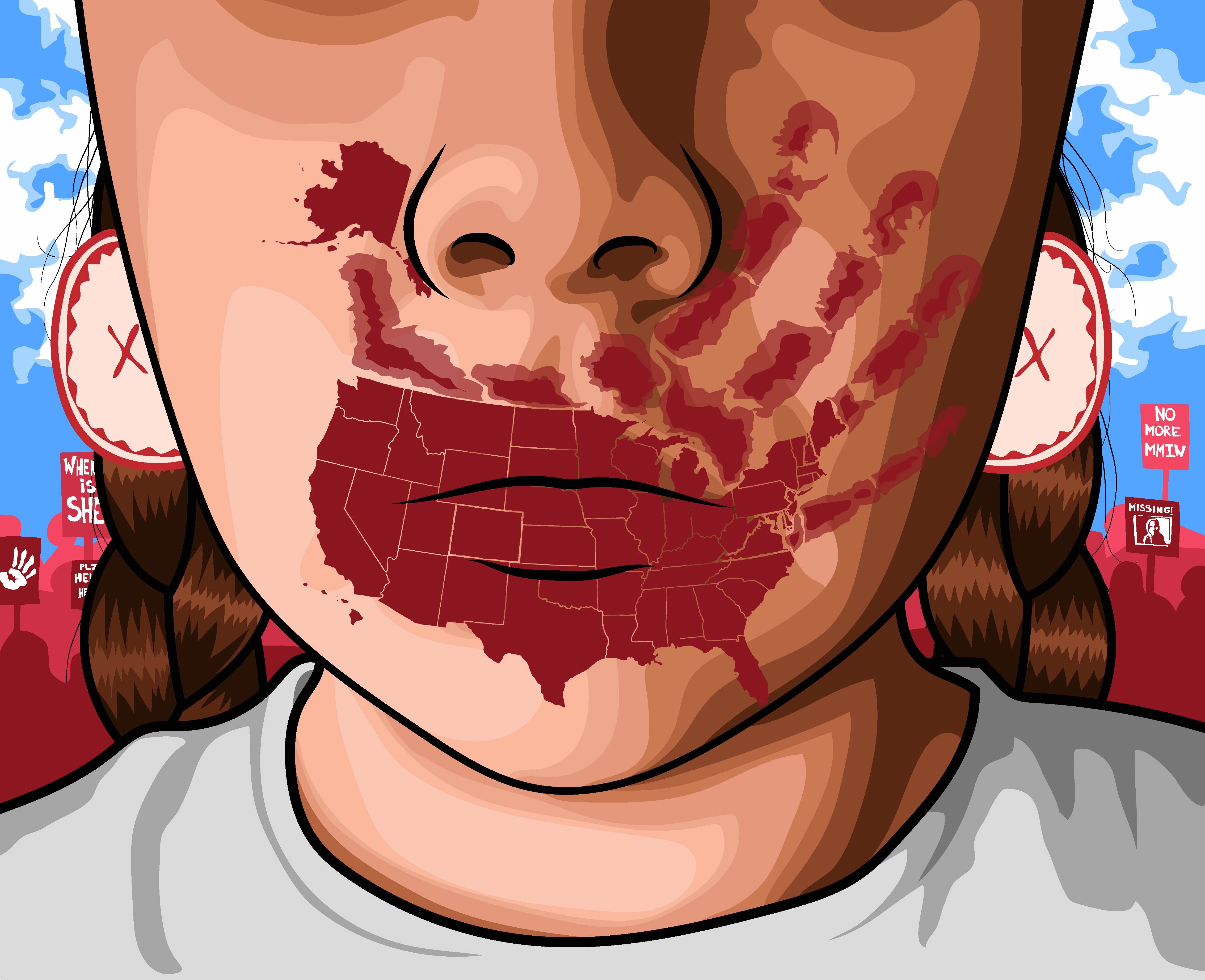 Why Is There Widespread Silence On This Issue?

There are numerous reasons, but at the forefront lie issues stemming from the Indian Relocation Act and federal policies. Many Native Americans do not live on the tribal lands or reservations (only 22%) where when someone goes missing, the community, and tribal law enforcement band together in search efforts. 78% of America's Native population lives off of the reservation with 60% of those residing in an urban area. Cities offer few ties to Native cultures, communities, and tribal law enforcement.

Many Urban Indians, people living in cities, fall into the "pipeline of vulnerability": people of color, people coming out of the foster care system, people of poverty.  According to Janeen Comenote, executive director of the National Urban Indian Family Coalition, “poverty remains one of the most challenging aspects to contemporary urban Indian life. While I do recognize that a sizable chunk of our population[s] is solidly middle class, every Native person I know has either experienced poverty or has a family member who is. Housing and homelessness remain at the top-of-the-list of challenges." 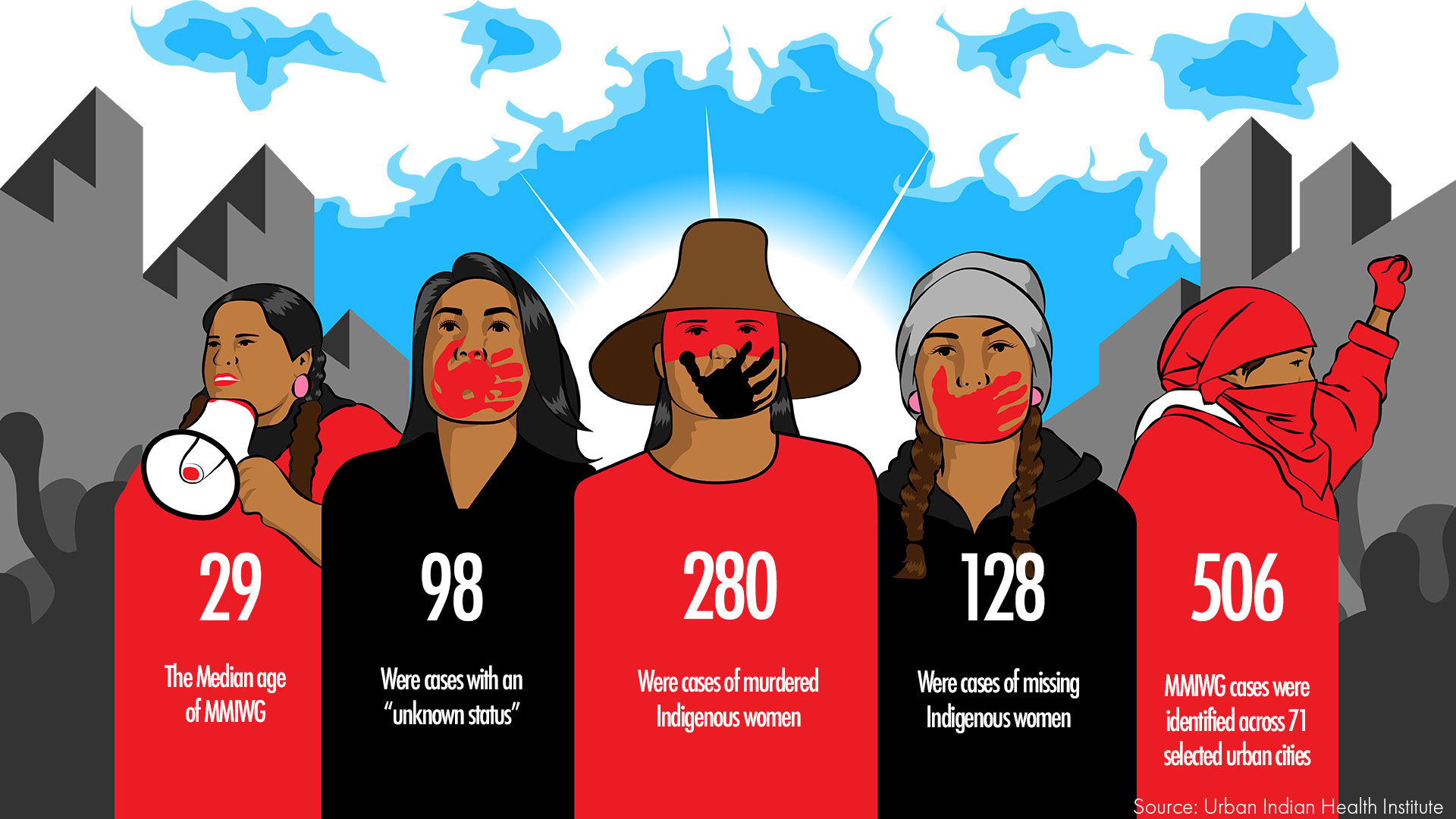 Native Americans today face some extraordinary challenges. These statistics from the Urban Indian Health Institute were compiled from a survey of 71 U.S. cities in 2016. The numbers speak for themselves: Native American women make up a significant portion of the missing and murdered cases. Not only is the murder rate ten times higher than the national average for women living on reservations but murder is the third leading cause of death for Native women. This is startling as Native people only make up 2% of the US overall population. Urban Indian Health Institute reports the youngest MMIW victim was a baby less than one year old and the oldest victim was an 83-year-old.

Due to the lack of tribal jurisdiction beyond reservation borders, Urban Indians receive less than adequate assistance when a loved one goes missing. America has written a stereotypical narrative for its First People: “They are lazy, drug addicts, and alcoholics who rely on the government to survive.”

Moreover, this modern stereotype was created through acts of colonization and cultural assimilation. Pre-colonization, Native societies traditionally revered and honored the sacredness of women. Women held positions of authority and did a large portion of labor within their camps, but the European colonists with patriarchal views took the women as slaves to the men. Soon, Native women had been victims of rape, violence, and submission. This mistreatment can be traced throughout America’s history. Natives were viewed as “savages.”

In Andrea Smith’s paper “Not an Indian Tradition: The Sexual Colonization of Native Peoples,” she explores the connection between sexual violence and colonialism on lives of Native people in the United States. Smith reveals that Natives were viewed as “dirty” for their lack of clothing which in the minds of the colonists made them “polluted with sexual sin.” They were seen as less-than-human—therefore, “rapable.”

Now, when a Native woman is reported missing, these negative stereotypes hinder the search process. Law enforcement tends to turn a blind eye, fail to take the report seriously, and do little to assist. The media rarely picks up on the story and if they do, there is normally a negative spin on the story making the victim seem at fault. 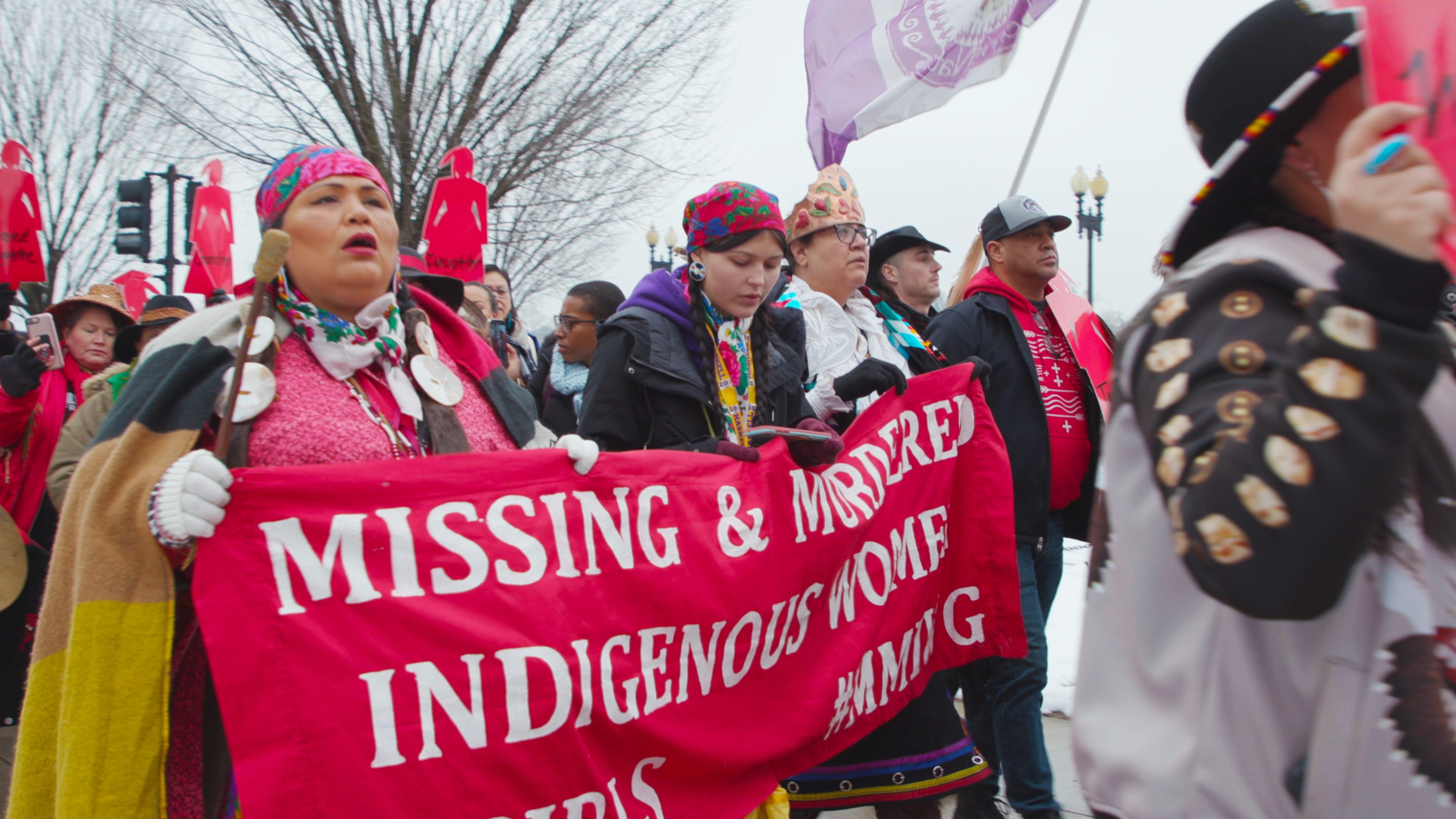 Thankfully, women and men, Native and non-Native, are working together through dozens of organizations to give voice to the MMIW.

MMIW found itself as a movement first in Canada where the grassroots efforts to raise awareness found footing around 2015. Since this time, MMIW has grown and is gaining momentum. It is because of the efforts of Native women and their families this crisis is gaining momentum. Women are finding innovative ways to sound their voices on this issue as it is profoundly affecting communities.

There has been increasing political attention to this issue. Arizona Governor Doug Ducey recently signed legislation to create a committee on the issue made up of law enforcement, victims’ families, tribal leaders, and more.

At the federal level, the Not Invisible Act was introduced this spring in both the House and Senate. According to a statement from Rep. Deb Haaland’s office, this is the first bill to be introduced by four members of federally recognized tribes: Representatives Deb Haaland (Pueblo of Laguna), Tom Cole (Chickasaw Nation of Oklahoma), Sharice Davids (Ho-Chunk Nation of Wisconsin), and Markwayne Mullin (Cherokee Nation).

The Not Invisible Act would bring together a committee of law enforcement, tribal authorities, federal partners, and more to study and discuss solutions to the crisis of murdered and missing Indigenous women and to establish better systems of coordination.

In January of 2019, Native Hope team members attended the Indigenous Peoples March.
There we captured Congresswoman Deb Haaland of New Mexico addressing the crowd with a message of hope.

One of her platforms is to combat the MMIW crisis. In an April 2, 2019, press release, Congresswoman Haaland explained, “The stakes are too high to keep the status quo in place. I’m introducing potentially life-saving amendments so that we can begin to break the cycles of domestic violence and missing and murdered indigenous women by providing resources and information sharing amendments to keep survivors of domestic violence safe from harm ultimately preventing future cases.” Haaland has proposed two amendments to the Violence Against Women Act Reauthorization (VAWA), HR 1585.

In 2019, Native Hope embarked on a journey to create a short film to raise awareness about an American crisis: Missing and Murdered Indigenous Women (MMIW). Orlando Skidmore (White Mountain Apache), screenwriter, and cinematographer brought forward his idea for a storyline to highlight some of the issues Natives face when combatting systemic apathy surrounding MMIW.

In the film, Marty Coulee is a Native American photographer and entrepreneur living the good life in New York City. When her Native American business partner, Jess, receives an unexpected opportunity to shoot in the American Southwest, they embark on an adventure to Arizona. However, the fun is short-lived when Jess vanishes without a trace. Consequently, Marty deals with her past, a system of racism, and false allegations—all while trying to find her friend Jess. These events fundamentally change Marty. She vows to be a voice for the voices unheard.

Since storytelling remains core to Native Hope’s mission, the team moved forward with the vision. Mark Lewis (Sac and Fox/Gila River), a filmmaker, worked closely with Orlando on a script and on assembling a crew and cast, plus location, supplies, and equipment needed to create the short film. Native Hope crew and team members assisted with pre-and post-production work in order to make this film a reality.

Voices Unheard premiered in Chamberlain, SD, at the State Theatre. We are grateful to theatre owners Donna and Jeff Buche for hosting the event. St. Joseph’s Indian School high school girls, their counselors, and house parents attended the event. After the film, the girls told one house parent, “I loved the film—I can’t wait to see the next, so we can find out what happens!” Her feedback is what filmmakers love to hear.

We hope Voices Unheard provides a vital context for those seeking to understand issues facing Native American women and girls.

Cast and Crew Comments about the Film

A special thanks to all involved—from actors, crew, grips, and producers. It was a team effort with people from many nations and cultures combining talents in a unified way to raise awareness for our stolen sisters.

Actor Vince Newton plays the Older Gentleman in Voices Unheard. Moving out west has made him aware of many Native issues he'd never heard about. As an ally, Vince takes every opportunity he can to support and bring awareness to Native issues including MMIW.

Supporting Actress Velveteen Kaskalla plays Jessie in Voices Unheard. She talks about how MMIW has become an epidemic throughout Indian country.

Actress Emily Peck is playing Payton in Voices Unheard. She feels strongly that this project will bring awareness to the MMIW issue.

Actress Dawn Lura, playing Rose in Voices Unheard, has been impacted by the emotion behind this film.

Join the Voices Unheard Grip behind the scenes Martin Rascon, Shaylee Skidmore, Cory Fong, Wykera Skidmore, and Cami Goldberg. They hope to help make an impact in MMIW through this narrative film.

Actress Graci Clark knew about MMIW prior to playing the hostess in Voices Unheard. As an ally, she decided to participate in this film to contribute to solving this epidemic.

Our Commitment to the Missing and Murdered Indigenous Women Movement

Native Hope wants to assist in the efforts of these courageous individuals and organizations on the frontlines of the MMIW movement by providing opportunities to raise awareness in a variety of ways. Through providing a platform, tools, and resources, Native Hope aspires to assist in bringing awareness of MMIW to the forefront. In order to stop this victimization of Native sisters, the world must be educated. Then, prevention can begin.

Contact us if you are looking for support or ideas on how to help with making others aware of the violence against Native women and children. #NoMoreStolenSisters

At Native Hope, we are passionate about raising awareness around Native issues and sharing stories of light and hope. We hope that this guide to Missing and Murdered Indigenous Women has increased your knowledge and inspired you to speak and work for justice.

Together, let’s speak up and work towards justice. 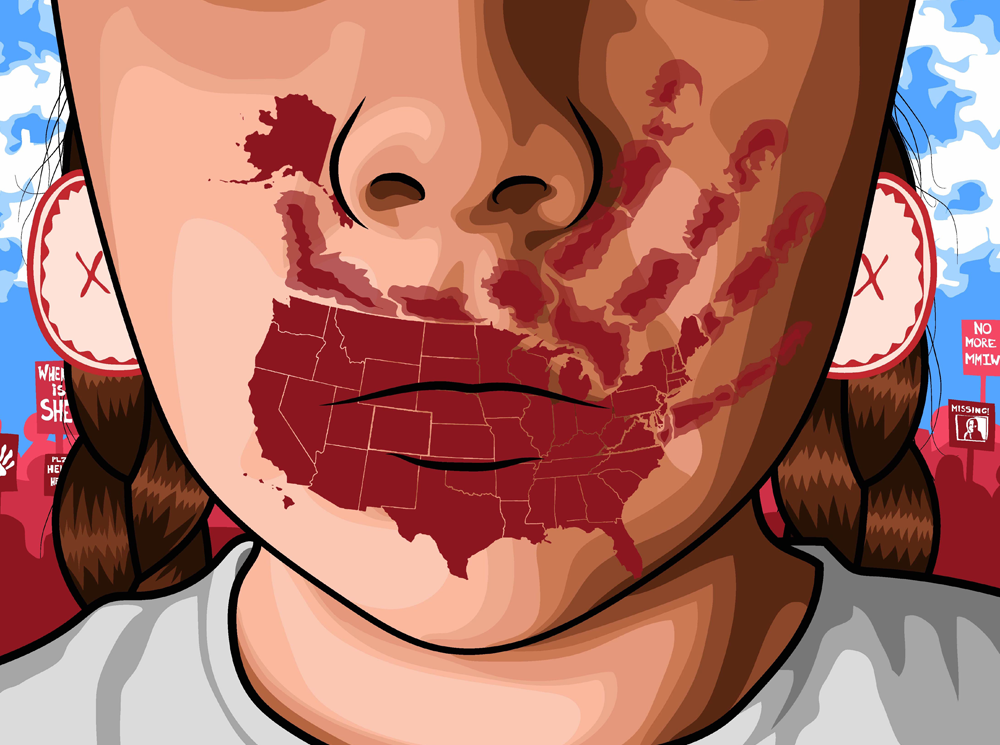 Native American women and children face alarming rates of violence—several factors make them among the most vulnerable. 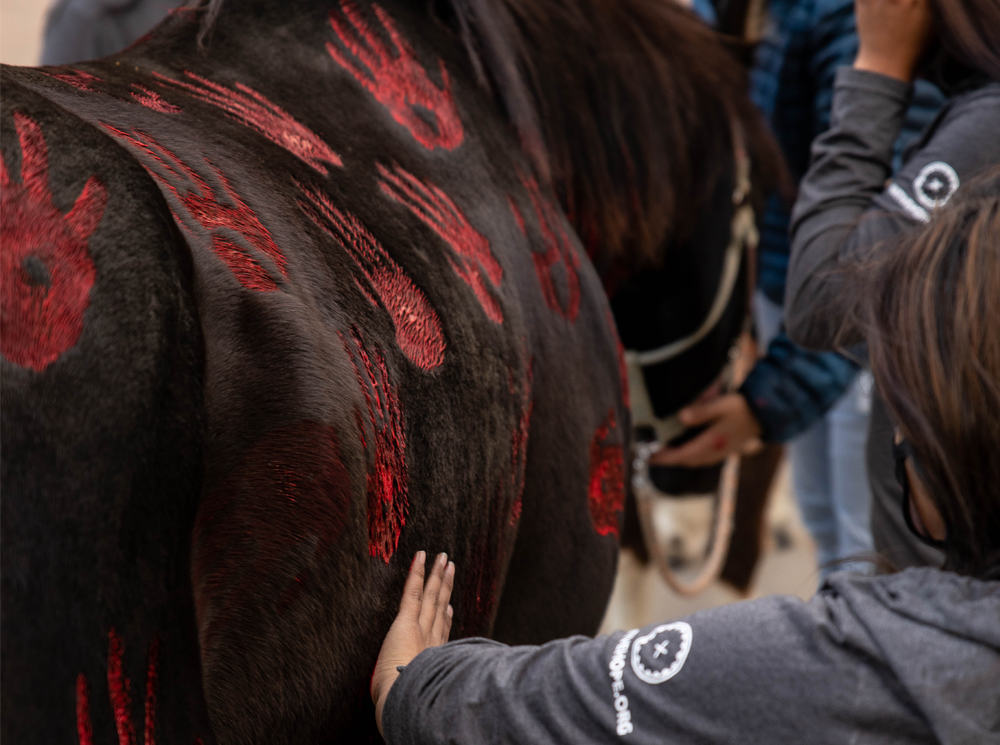 With your support we can dismantle barriers and inspire hope for Native voices unheard.